YETIBIKERACE is a trip organized by the outdoortour operatorr agency in Nepal Makalu Adventure y operated by Europa Travel S.A.

STAGE 1 BESI SAHAR – YAGAT. 30K and 1200m of accumulated altitude.
We moved by private vehicle of the organization from Kathmandu to Besi Sahar, where we arrived around 13.00hrs. Light meal and start of the first stage that will pass by track in the Marsyarni Mani river valley, always ascending north direction surrounded by a subtropical landscape, where it is easy to find perennial species such as banana trees. The mountains on both sides of the river are giant but the perpetual snows of the Himalayas are far away.

Upon our arrival in the village of Yagat, a bath in its thermal waters awaits us as a reward for our well-deserved effort. Free time, walk and dinner around 8:00 pm. to rest. 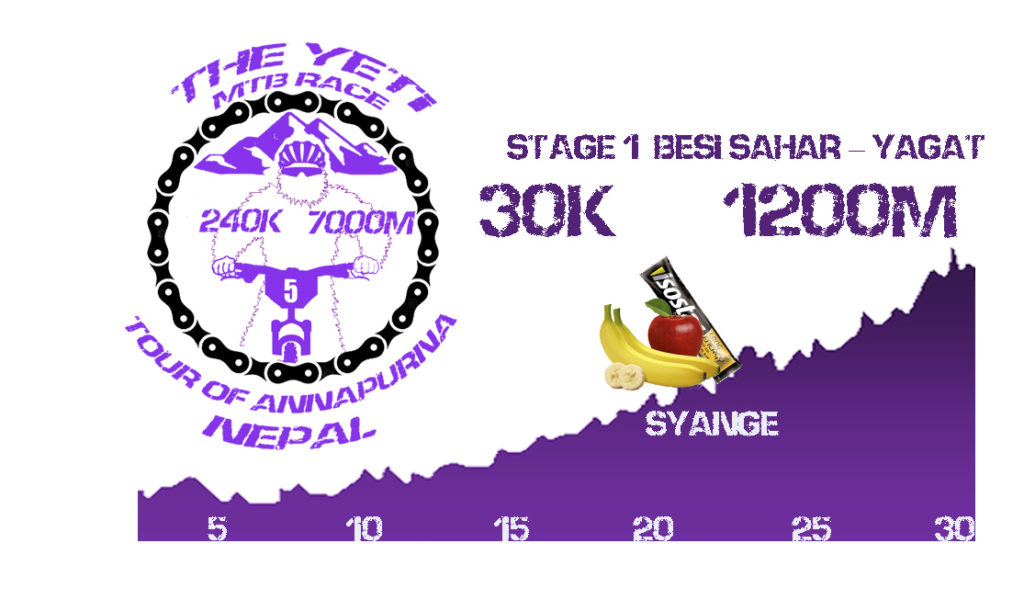 It is the hardest stage of the YETI BIKE RACE. It starts at 9:00 am in the morning and accumulates 2500m of altitude in “only” 32 kilometers. The ascent is mostly by bumpy track, bypassing bridges while we see waterfalls on both sides of the road and the landscape changes constantly, leaving the bushes to reach the coniferous forest; pines, firs, cedars …

In this stage we passed many villages and we will have supplies in the 20 kilometers in Tal and 18 in Gabarchap. The altitude can begin to feel because we have 20% less oxygen than at sea level. The goal is in Koto where we will eat and in the afternoon we will do a gentle acclimatization trekking and we will take advantage of the opportunity to visit a Buddhist temple 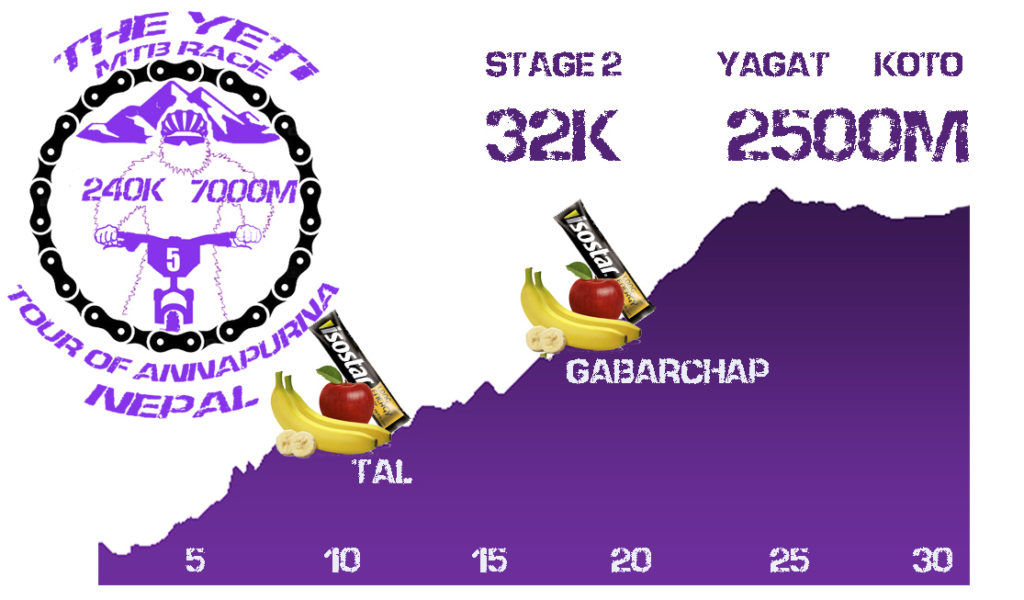 It is a stage in which we will feel the effects of altitude because the goal is located in Manang, at 3300m above sea level.

The orography is less demanding than in the previous stages, since from kilometer 10, after the provisioning of Bhratang, we reached a plateau at 3000m of altitude where we cycled constantly without large slopes on a false plain that is wearing down. From here we already witnessed some of the great peaks of the Annapurnas massif, more than 8000m high. The second supply is found in Humde, a picturesque village surrounded by slender pines. The forest begins to wane due to the lack of oxygen and becomes arid reaching Manang, where the goal and food are located. In the afternoon, a gentle acclimatization trek to visit the Ganggapurna glacier, which lies near Manang and the guide will explain the functioning of the glaciers. 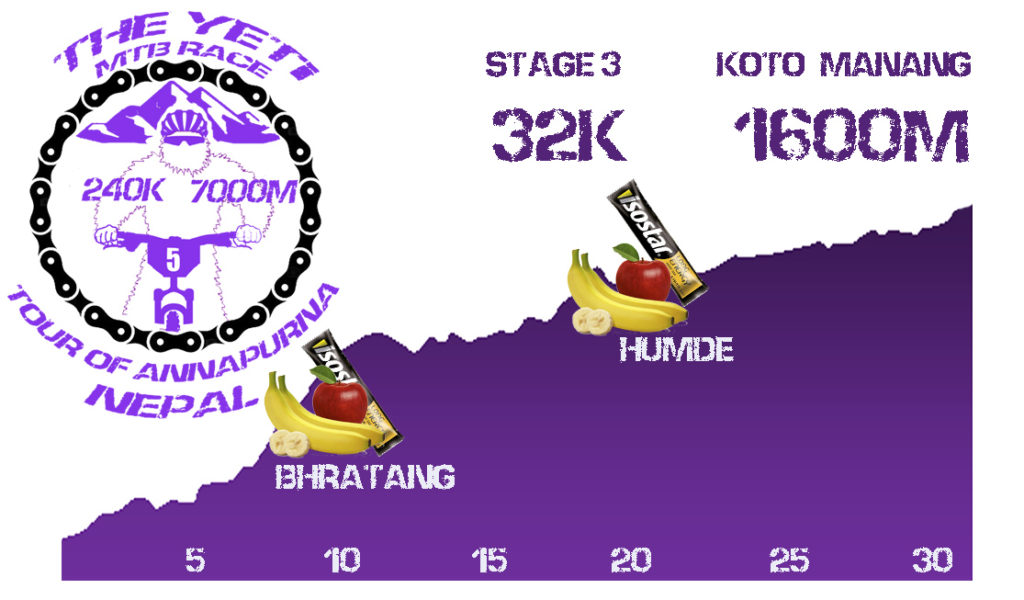 STAGE 4. Manang to Ledar. 11km and 900m. DAY OF ACCLIMATIZATION. NOT CHRONOMETRATED

Short but demanding stage due to the altitude. Active rest day. The output can be done as a group or individual by not counting for classification. A very slow rhythm is recommended to favor acclimatization. It is an itinerary that impresses by the magnitude of the mountains that surround us, some exceeding 7000m. We passed numerous mountain huts, identified with their Nepalese flags. Day for observation and acclimatization to the altitude where we observe small coniferous forests and creeping junipers, where yaks move, wild goats of the Himalayas and even the elusive and threatened snow leopard.

Lunch in ledar, at 4200m and Trekking in the afternoon. Dinner and accommodation in mountain hotel.

The route of this short stage is cyclable by 60%, not by its unevenness if

not because of the difficulty of the altitude, so it is recommended to do it calmly. Path by 90% and track by 10%. The increases in some points exceed 20% difference. 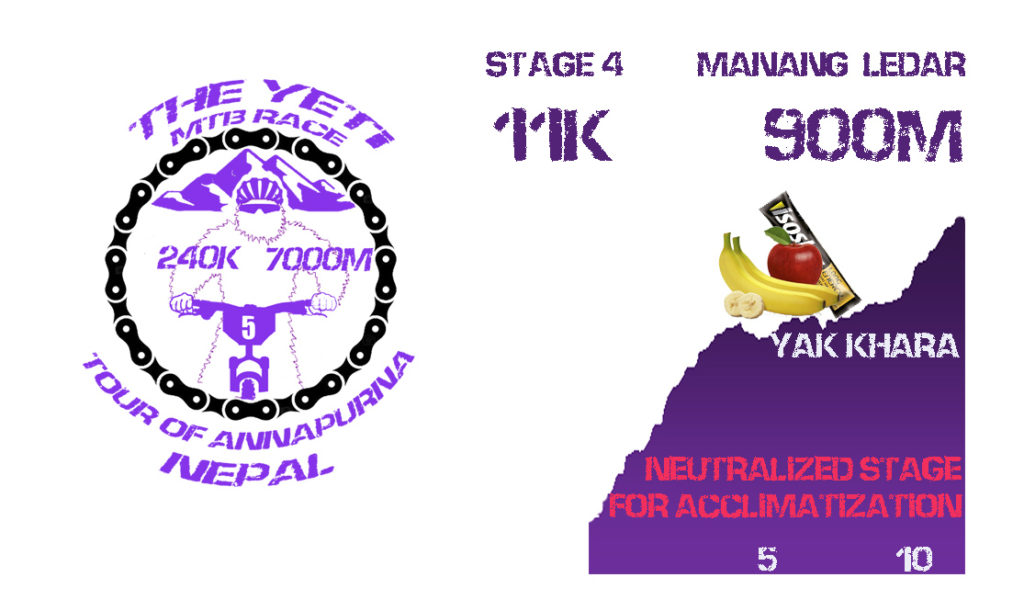 SECTOR 1 (NOT CHRONOMETRATED) 7.00hrs you leave Ledar with porters to ascend to High Point where the exit will be. It is the highest pass of the cyclable planet, at 5416m above sea level. 7km and 1000m unevenness. Food in High Point.

SECTOR 2 4th Stage YETI MTBR 12.00hrs. High Camp – Marpa. 37Km. with accumulated 900m of ascent and -3000 of descent by incredible hills 98% ciclables. 2 Refreshments. The Lupra Valley is considered one of the most beautiful descents on the planet. In the afternoon visit Buddhist monastery in Marpa. Dinner and accommodation in mountain hotel. 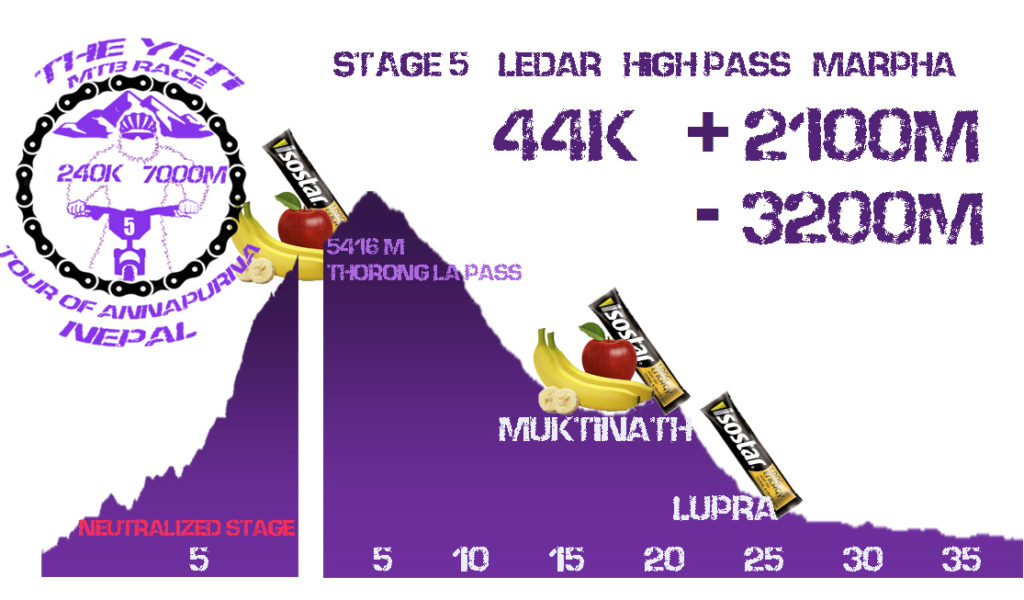 It is the last timed stage of the Food test.  We go out to the river that we will cross by its footbridges on different occasions, occasionally entering forests of incomparable beauty. We will have supplies in the village of Ghasa and we will find picturesque villages in our way.

We will finish in Tatopami, a well-known municipality where we will take a bath in its thermal waters. In the afternoon final ceremony. Dinner and accommodation in a mountain hostel. END OF TIMING STAGES. 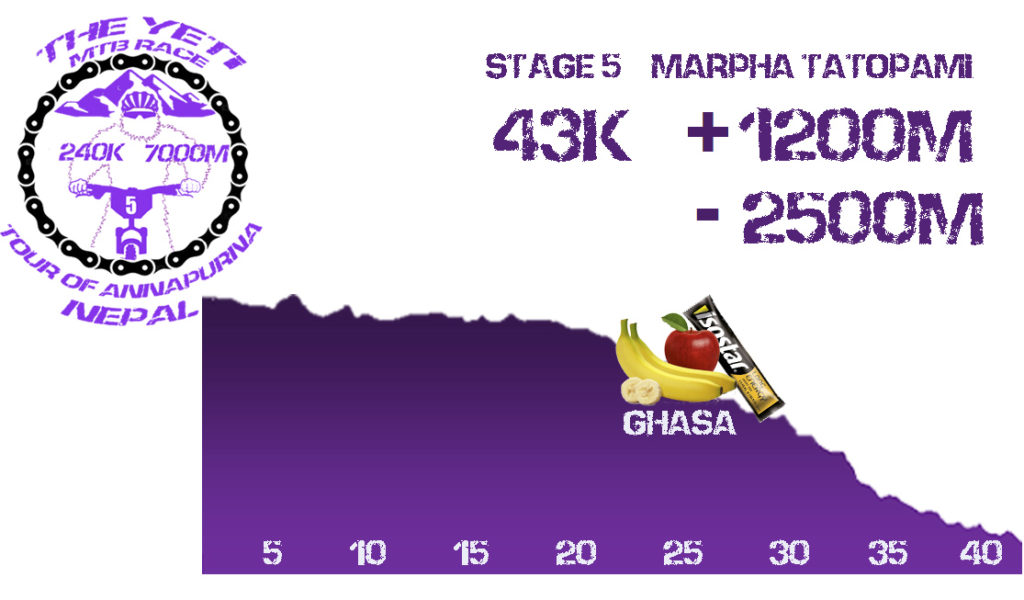 We start neutralized from Tatopami, enjoying this last stage NEUTRALIZED to unit the group and make cohesion. Whoever prefers it can descend in the vehicle of the organization. Lunch and transfer in Bus to Pokkara. Visit lake and ceremonial party of the end of the YETI MTB Race. Award of trophies and finisher medals. Dinner and overnight at the hotel. 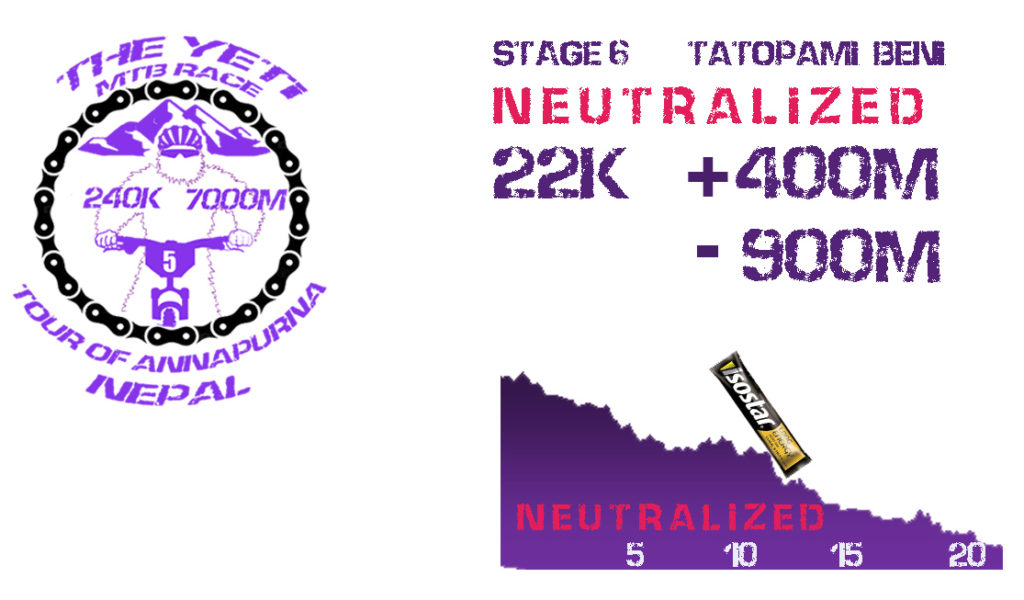